A few weeks ago I made a trip down to London Design Festival to check out some new up and coming brands at three separate events around the city. You can read about some of my favourites here. It’s one of my favourite design events, with some of the most epic trade shows around and a chance to chat to the designers behind some of my favourite brands.

It wouldn’t be a trip to London without a wee wander around some of the foodie haunts I have on my Master List. LDF is always a bit hectic for me, so I didn’t get my usual three-meals-a-day-plus-afternoon-tea-and-snacks routine in; my lovely boss did take me out for dinner on Friday night and breakfast on Saturday, so I managed to tick another few off my wish list.

Friday was our busiest day, with me spending a whopping SEVEN hours at 100% Design at the Olympia, followed by a quick hour or so at Design Junction at Granary Square. Please send condolences to my poor feet. My boss took me out for dinner at a restaurant I’ve been dying to try for months, an organic, vegan Japanese place near Kings Cross called Itadaki Zen. Let me say that again, a VEGAN JAPANESE RESTAURANT. Now Japanese food has always been one of my favourites; I could eat tempura udon every day for the rest of my life and be blissfully happy. Unfortunately, tempura batter often contains egg. Sushi usually includes fish. I can’t eat either of these things, and the usual offerings for vegans are pretty dull if I’m honest. I love avocado, but how many plain avocado makis can a person eat before they fall asleep facedown on their plate with boredom?

Itadaki Zen focuses on the “healing qualities” of food. They ethos is based around maintaining a healthy balance of grains, vegetables and seaweeds for a healthy and balanced body, not to mention a total move away from meat, fish, and any animal products. I felt healthy just thinking about it. Japanese cuisine is for the most part one of the healthiest; even fried foods are quick-fried in super-hot oil rather than at a lower temperature for longer like fish and chips. Noodles in broth are warming and nourishing, and there are always vegetables aplenty in any dish. Anybody who’s feeling a bit run-down and ill can usually face a nice hot bowl of miso soup even if they can’t stomach “solid food”. Japanese food is just awesome.

I hate it when people ask how sushi can possibly be made vegan, or imply that there is a limited amount of ingredients that can be used. We ordered the 8-piece sushi いただき繕キンパセットand it came with everything from Japanese mushroom, grilled courgette, tofu, pepper and kale topped nigiri. It was tasty, imaginative, and oh my GOD it was so pretty! 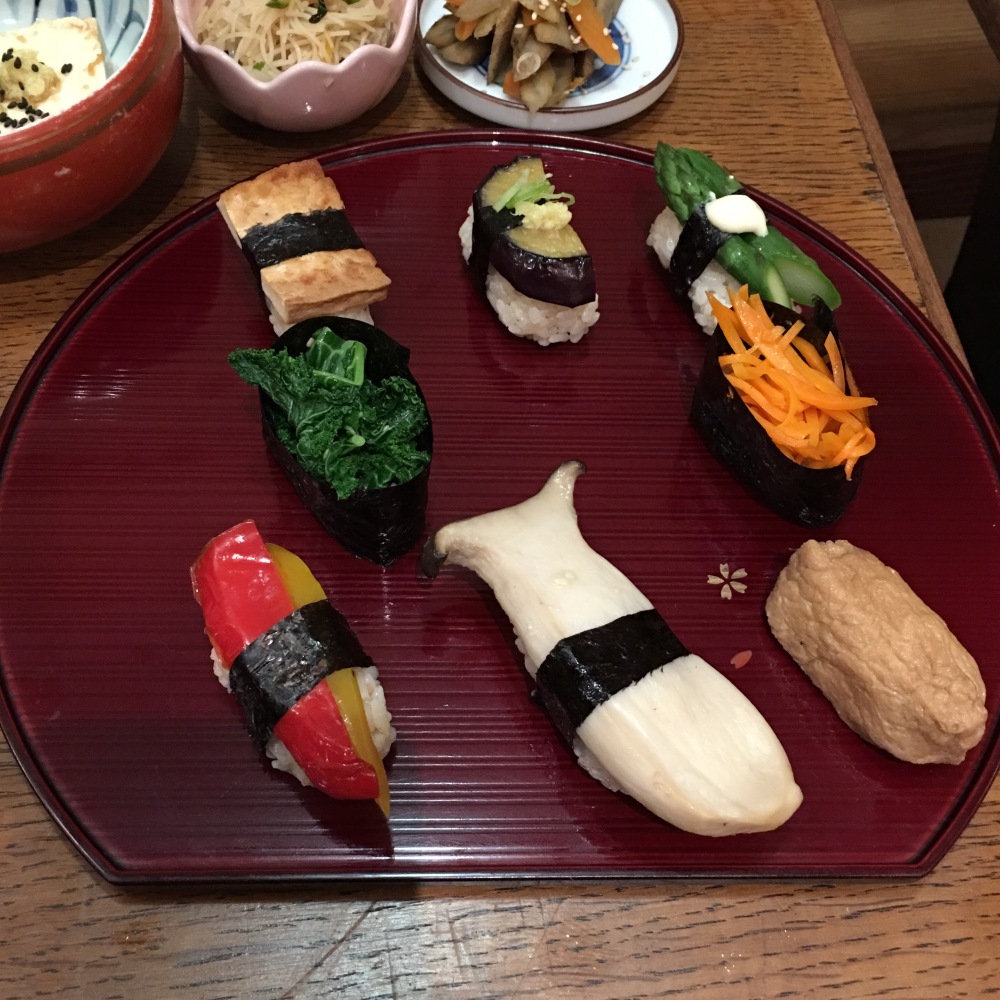 Then came the Harumaki 春巻き, or deep fried spring rolls filled with okara (soy pulp), tofu and vegetables. We also went with the raw organic Tofu 豆腐 in Yangyeom sauce, and Ryokusaimaki 緑菜巻, a spring green “roll” with an okara and vegetable filling. The Harumaki were clearly fresh and homemade, unlike the usual spring roll suspects that taste a bit like they’re *coughcough* cooked-from-frozen. I didn’t actually manage to get a photo of the Harumaki as we were so hungry they were half eaten by the time I even remembered! Ryokusaimaki is a traditional Japanese dish not often seen in the UK., but it really should be as it’s absolutely delicious. 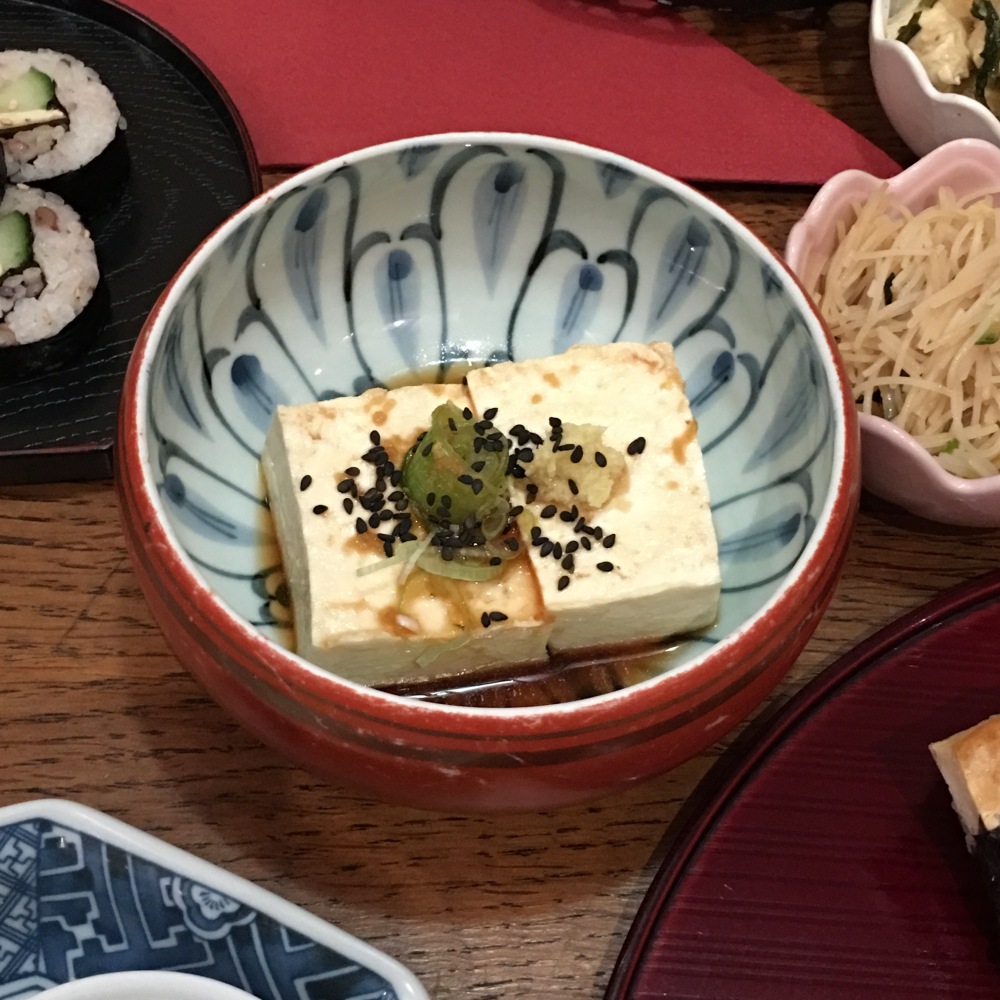 I couldn’t resist the Kakiage udon set 掻き揚げうどんセット, which was reminiscent of the soup noodles I’ve loved ever since I was a wee kid and topped with spring onions, sesame and marinated peanuts. The set came with wee side dishes and maki sushi roll filled with cucumber and peppers.

That tempura 天ぷらコース was probably the best I’ve ever had, vegan, vegetarian or otherwise. Even in my previous incarnation as a prawn-eating omni (jeez) I’d never experienced a lighter, crispier tempura batter. Instead of chunky slices of root vegetables, the chefs julienned carrots, sweet potatoes, and courgettes and dipped them in that delightful batter so the whole piece of tempura was beautifully crisp.

Itadaki Zen has been on my “Must Eat” list for as long as I’ve been vegan, and I’m so glad I finally made it. The food was superb, and filled that serious sushi craving I’ve had since I stopped eating seafood over a year ago. My only issue with the place is that I have to travel 5 hours on the train to eat there.