Another year, another outfit post. Today’s theme is CANADA.

I just got back from a fabulous fortnight in the motherland, and I miss it already. I sometimes wonder if I’d stayed, would I be as obnoxiously Canadian as I am now? A maple syrup chugging, beaver hugging, hockey watching fan of moose and geese? Would my favourite tartan be lumberjack? Would my favourite leaf be the maple? Would I still pine for poutine? Who even am I?!

I was accompanying the lovely Flo to get her new fox tattoo, and figured this was a good chance to hoodwink her into taking some outfit photos. Who doesn’t want to stand outside in the freezing cold snapping pics of a cackling Canadian wearing a sweary sweatshirt and a Minnie Mouse bow? Who doesn’t love seeing me flash my maple leaf underpinnings (worn over my tights, superhero-style)? She is a good friend. A patient friend. Remind me to send her some mini muffins.

This is the first chance I’d had to wear my new Wully Outerwear coat, a very generous Christmas present from a very lovely human being. Y’all know I love ethical fashion, and being vegan that also means staying away from clothing made from animal products. Wully Outerwear is a relatively new company, founded in 2015 and with a very strong basis in animal welfare. They wanted to raise awareness about the conditions of animal trapping for *those* fur-trimmed, down-filled winter coats that seem to be everywhere. Do we need the insulation of down to stay warm when the weather dips? Of course we don’t! Is a coyote fur trim going to keep that brisk wind off your face? Of course it fucking won’t. Don’t be ridiculous. We have things like technology, man-made fibres, and technical textiles now. These “high-end” feather and fur garments are nothing but an inflated status symbol.

The topic of “vegan” clothing is something I rant – I mean talk – about often. One thing I absolutely hate is that what’s usually on offer on the high street is accidentally vegan, because it’s cheap as fuck. Not cheap as in inexpensive, but cheap as in crap. So many high street retailers sell poorly made, poorly designed clothing and accessories in faux leather; that rubbish wouldn’t even last a season, is probably made in a fucking sweatshop, and basically falls under the umbrella “not good enough to be real leather”. Well I call bullshit. Why can’t vegans have high-quality, stylish, well-made and thoughtfully designed fashion that we’d actually want to wear? Why can’t we have nice things?

We need to normalise veganism. Stop being classified as hippies who don’t mind wearing hemp sacks and cheap plastic shitty shoes. We need to demand better quality clothing, shoes, bags, and accessories, because you know what? Caring about animal welfare and style shouldn’t be mutually exclusive.

Have y’all noticed that I can’t really let an outfit post slip by without sliding a wee message about ethics or equality in there somewhere?

Wully Outerwear donates $10 of the sale of every coat to the Association for the Protection of Fur-bearing Animals, AND they offer a trade-up programme. Bring them a Canada Goose jacket, one of those monstrosities filled with down and trimmed with coyote fur, and they give you basically half off a new Wully coat. They are then distributed to charities to help the homeless. How fricking amazing is that? A company with an actual conscience, and being Canadian designed and made, that’s just a bonus. It’s so important for companies to not only be creative disruptors to disposable fashion, but to also remain innovative in doing so. Wully does exactly this.

As today’s #OOTD theme is Canada, I decided to pair that fabulous Wully parka (which is lined with my very favourite of all the plaids) with a pair of faux suede over-the-knee boots I bought in Toronto’s new vegan concept store The Imperative . The boots are from a Portuguese vegan shoe company called Nae, and they are so comfy.  Also I *might* have had a wee giggle at the fact they’re “NAE boots”, because they are, quite clearly, boots ;-). The bag is from a very fabulous vegan company called Mechaly, which I also picked up at The Imperative. The shop has an excellent selection of all-vegan and cruelty-free products, so when I finally have time to sit down and write my Vegan Toronto blog post, trust me it features heavily. If you’re lucky enough to be in Toronto, it’s over at 1332 Queen Street West in Parkdale. Just opposite Doomie’s. Revel in that incredible shoe department. Grab yourself a plant-based Philly cheese “steak” and boozy oreo milkshake whilst you’re in the area. 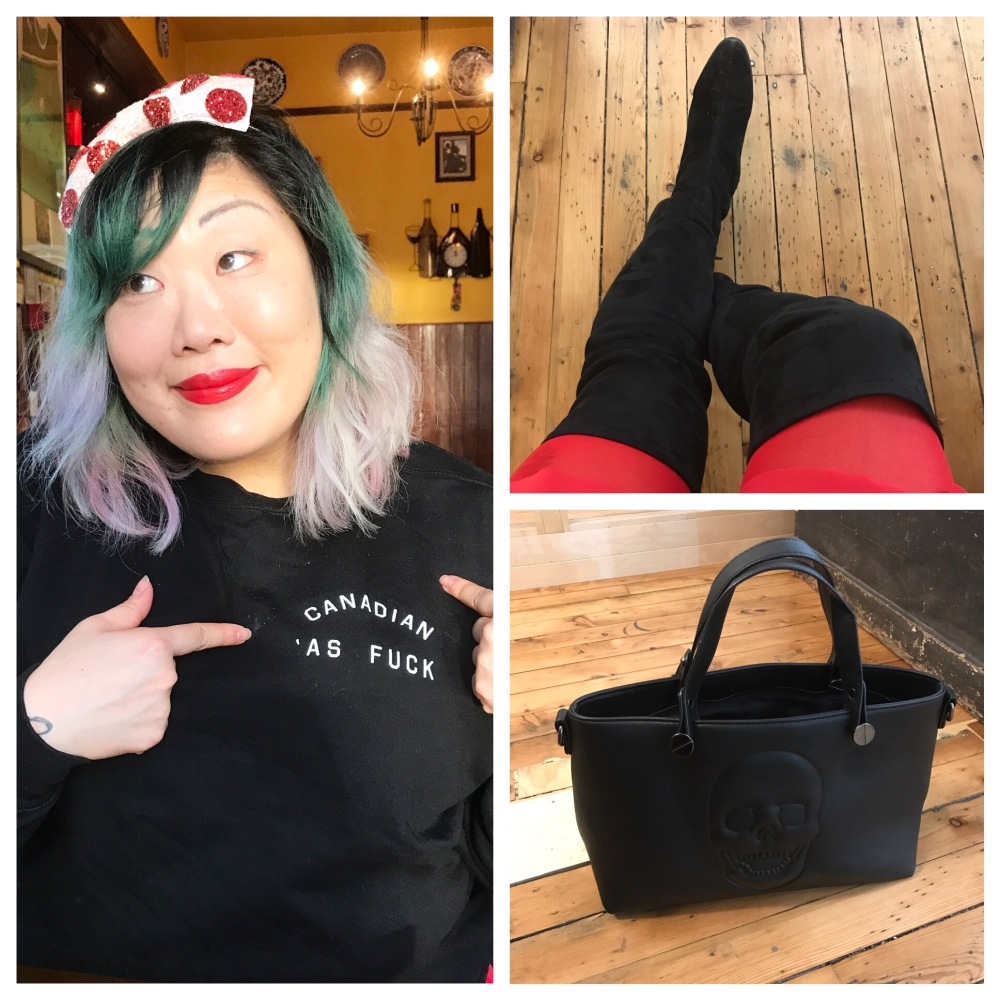